As you will have seen from the newsletter the heating in the church hall has been upgraded.  We had been putting it off and putting it off always hoping that the original gas boiler, installed when the hall was built in 1983, would keep going.  It did, but our various heating engineers advised us it was no longer efficient and was probably costing far more to run than was necessary.  They also pointed out that with modern  technology we did not need a costly commercial boiler but a large domestic one would do the job perfectly and be much cheaper to run and to maintain.   With the hall effectively closed by the pandemic we decided it was time to act.

Our friends at Kent Heating here in the village came up with an unbeatable quote and the work started.  The old boiler was disconnected and manhandled out of the boiler cupboard, but it needed a forklift truck to lift it up and cart it away.  The new boiler was quickly installed but that was the easy bit It was the rest of the system of pipes and radiators that took rather longer to sort out as numerous problems came to light.  Most of the pipework is under the floor or boxed in the ceiling.  Some radiators had not worked for as long as anyone could remember and all of the valves needed replacing.  As you can imagine after thirty-eight years the amount of sediment, rust and dirt that had collected in the system was another problem.  In the end some of the pipework was so blocked it had to be replaced.  Even the water supply into the boiler had to be changed from a small header tank in the roof to a direct connection from the mains.

At least the cold weather this month has given us a chance to check the system and also check the new remote controls and thermostat work.  The final adjustments were made on Monday (24th May) and hopefully the weather will improve and we won’t need to run the heating until September.

In the meantime many thanks to the team from Kent Heating and in particular Gary who refused to be beaten by any of the problems, including the last minute discovery of a small radiator hiding in the coat cupboard!

With the church re-opened, albeit for a limited time, the new Memorial Rose Bed has started to flower, many thanks to those who helped establish it and to those who sponsored the rose bushes.

With the Maintenance Fund now firmly established, I thought it might be helpful to let you know how the money is being spent. The problems with the church heating system (see the details below) meant we had to delay some of the work we had planned to carry out. One job in particular, the painting of all the external doors, was put on hold. Some of the doors were badly weathered which has made the task more difficult but it has now been completed. The wooden facia boards above the canopy at the front of the church have also now been filled and painted. Unfortunately they were very badly weathered and rotting in some places. So they have been patched-up and painted for now but we will have to consider replacing them (possibly with plastic) in the next couple of years.

Another long standing job to replace the disabled toilet in the hall with one that is slightly higher and more suitable has also been completed and various leaky taps in the hall and church have been replaced. Many thanks to Chris Parkinson for carrying out all the work.

A recent electrical safety inspection (by contractors appointed by the diocese) gave the church and hall a clean bill of health but it revealed a whole series of issues in the presbytery that had to be put right. Work has now been completed.

Thanks to our teams of volunteers we have managed to spruce up the flower beds. We have spent some money on a membrane and wood chips to smother the weeds, we have also turfed the flower beds on the right of the church with the aim of making them easier to maintain. We launched a scheme for parishioners to sponsor a “memorial” rosebush in the flowerbed on the left of the church. We have been overwhelmed by the response and all available spots have been taken. All of the roses have now been planted and we will see the result next year.

Many of you will have noticed that the front gate leading to the presbytery has got smaller! It hasn’t been vandalised it’s just been cut in half! Previously the gate was difficult to open and close and these days enclosed front gardens are seen as a security risk. We have also lowered the fence panels, either side of the gate and are considering lowering all the remaining panels in the Spring.

For a number of years people have complained that our church was difficult to find as the name was not clearly visible from the road. There used to be a sign fixed to the wall by the main gates. Unfortunately that was vandalised and never replaced.

Since then the metal railings have been installed so we hope that our new sign, welcoming everyone to St John Fisher, will stand a better chance of surviving.

There are a number of other jobs that need doing and top of the list is sanding and sealing the hall floor!!! So please keep supporting our fundraising events!

The work to repair the heating was completed last year and it worked successfully throughout the winter. By now everyone has got used to seeing the new copper pipe around the top of the church below the windows. Although we would have liked to be able to hide the pipe behind the woodwork the cost of removing the old leaky pipe would have been prohibitively expensive and disruptive. 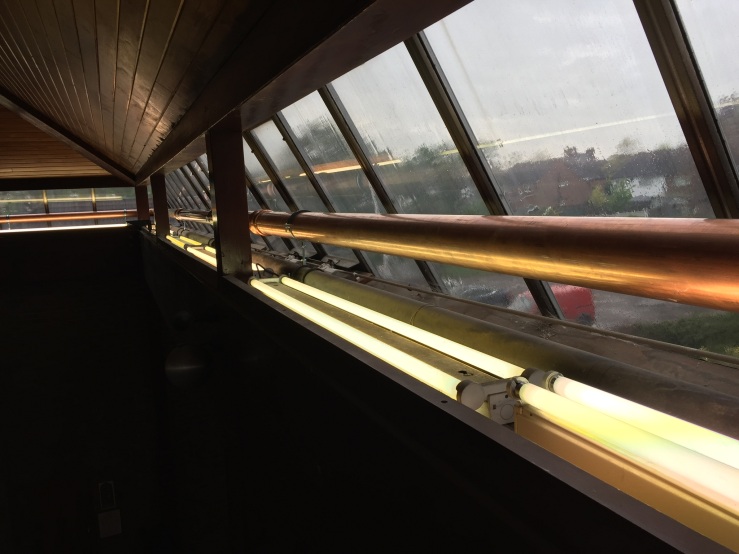 Just to recap on what went wrong:
Two years ago we found that a part of the heating system which keeps the water at a constant pressure had stopped working. It dated back to the building of the church in 1975 and could not be repaired. Various alternatives were considered but eventually the company which service and maintain the boilers advised us that it would have to be replaced.

A new unit was ordered and, after some delays, was installed at the start of December. However once it was fitted and the system was refilled, water began pouring down from the roof space in one corner of the church.

Everything was shut off and we discovered that the church had two heating circuits. One just above floor level and the other in the roof, just below the windows. Unfortunately there are no plans of the heating system in the church files so no-one on the premises committee or at the maintenance company was aware of the pipework.

The heating engineers discovered that part of the high level pipework was corroded. Although they might have been able to replace the section they advised us that other parts of the pipe might be similarly affected. They also pointed out that there was no automatic system for getting rid of air from the pipework, a fact which may have contributed to the corrosion and which dates back to the original installation.

With Christmas rapidly approaching we decided the quickest solution would be to shut down the top heating circuit and rely on the lower system to warm-up the church. It should have been relatively easy but after 42 years the two-cut off valves refused to shut down.

It was another week before our heating engineers were able to organise scaffolding so they could work on the pipes and install two new valves. The scaffolding went up first thing in the morning on the Friday before our Christmas carol service. By midday, Mike from K&.T Heating had finished the job and tested it while we waited for the scaffolders to return and by 1.30 everything had been cleared away.

Since then, by turning up the temperature of the boiler and switching the system on earlier, we continued to heat the church using only the lower circuit.

Is the top circuit necessary?
Something we wondered at first, but the whole point of the top level is to create a cushion of warm air in the roof and so prevent the heat from the lower level rising up behind the wood panelling and going straight out the windows. It also helps to stop condensation on the windows and frames and so prevent corrosion. The recent very cold snap demonstrated that the lower circuit on it’s own was not enough.

Having consulted with two companies that specialise in church heating it became clear that the easiest and cheapest solution would be to install a new pipe. We accepted a quote from K&T heating who have maintained our boilers for a number of years. They offered the cheapest solution and a much shorter time scale to complete the work. As well as the new pipe they are also arranged for the system to be flushed through and fixed a couple of valves that were showing signs of leaks.
Peter Murphy (Premises Committee)

A more cheerful picture taken from the top of the scaffolding! 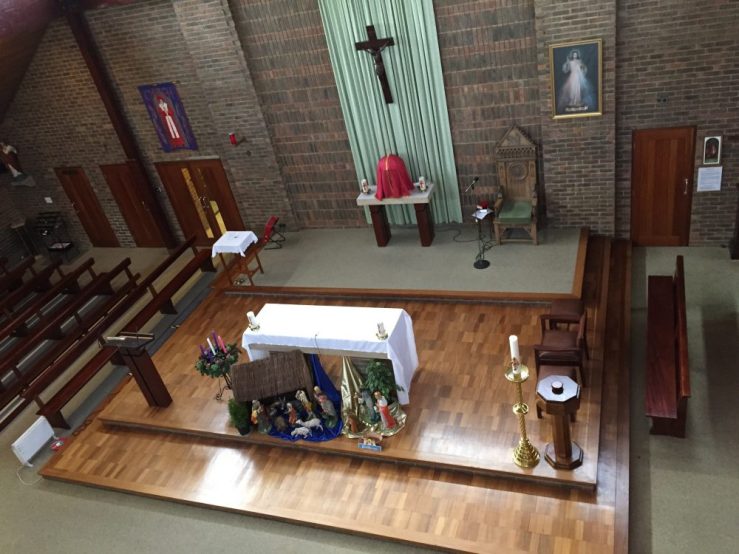